Why You Should Buy The New Mac OS X. Now.
by David Coursey, ZDNet
While earlier versions of Mac OS X were aimed at the installed base of Mac users, Jaguar will be attractive to Windows users who want to switch as well as Mac users who want to upgrade.

Apple Lets Jaguar Out Tonight At Stores
by San Francisco Chronicle
Macintosh fans who can't wait until Saturday to buy Apple's latest operating system upgrade can purchase a copy late tonight at Apple's own retail stores around the country.

High School Students Start Video Venture
by Mark Garrett, The Tilsonburg News
"It's fun to do something on the computer and make it better."

Try The Taste Of An Apple Mac Menu
by Vikki Bland, Stuff
Next time you need to buy new hardware for your small business, remember the Apple Mac is an option.

She's The Elusive Apple Of The Web's Eye
by Susan Carpenter, Los Angeles Times
Fans can only imagine who the teen in a Mac ad really is. And do they ever.

Apple's Xserve Server Debuts In The Philippines
by Lawrence D. Casiraya, Manila Business World
In the Philippines, Apple has partnered with Oracle, APC (American Power Conversion) and HP, which expressed support for Xserver through its OpenView server management software.

Best Viewed In
by Adam Robert Guha, Low End Mac
I really do expect a webmaster to test his or her site on both Mac and PC — and in both major browsers — to make sure that it works fine and looks good in each.

Oracle 9i, Full MSN, To Mac OS X. Tell Me Jaguar Isn't The Real Deal.
by Derrick Story, O'Reilly Network
At some point you have to ask, "What does it take to get serious about this operating system?"

Apple iMac 17-Inch Widescreen; Apple OS X 10.2
by Troy Dreier, PC Magazine
Current OS X 10.1 users may balk at having to pay for an upgrade so quickly, but we feel the money will be well spent in the long run.

Jaguar—OS X 10.2
by Chirstoper Allbritton, Popular Mechanics
All these features really just scratch the surface and give you the feeling that Apple is releasing a new operating system instead of just a refinement to an older one.

How To Go From Kernel Panic To Clean Install In 14 Long Hours
by Chris Cummer, Forwarding Address
14 hours later, all is well with the world again.

Anne Holland tells us why you shouldn't send out newsletter before 9.00 am.

Dave Winer: I felt scared like you feel on a NY subway platform as a train is entering the station and you're standing on the platform and in the instant before it passes you think how you could end your life by leaning forward. 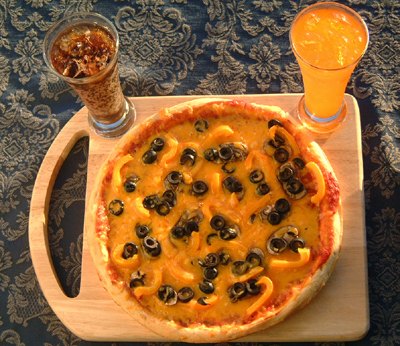 The Jaguar Genius Pizza. Have one while upgrading.

The planned revamp of MyAppleMenu scheduled this weekend will add RSS discovery functionality.

Okay, so this wasn't a difficult thing to add into MyAppleMenu. I should have done this long ago.

It's just that MyAppleMenu publishes multiple RSS files, which means my laziness does set in.

Permanent Link to item above

Borland's Developer Tools Take On MS
by Wylie Wong, ZDNet
After nearly being knocked out for good by Microsoft, software maker Borland is back on its feet and eager for a rematch.

HP Still Reigns Over 'Crown Jewel'
by Richard Shim, ZDNet
HP's reign over the printer market continues, according to a report from research firm IDC.

Microsoft 'Trinity' To Bring Unity To .Net, Office Developers
by Mary Jo Foley, eWeek
Microsoft is working on a set of tools, code-named Trinity, aimed at consolidating two of its largest developer camps: those writing for Office and those writing for .Net.

MyAppleMenu is edited by Heng-Cheong Leong. This site is not affiliated with Apple Computer, Inc. or any other companies in any manner. Apple, the Apple logo, Macintosh, Power Macintosh, PowerBook, iMac, iBook, iPod, and eMac are registered trademarks of Apple Computer, Inc. All other brands or product names are trademarks of their registered holders. Copyright © 1996-2004 Heng-Cheong Leong. All rights reserved. MyAppleMenu supports the Open Link Policy.